The PMI Metropolitan St. Louis (PMIMSL) Chapter is a globally recognized, award winning chapter among the 280+ PMI chapters worldwide. Our chapter has been recognized for outstanding programs, member services and collaboration and outreach initiatives by our peers in Category III. The PMI Metropolitan St. Louis Chapter has become an award-winning chapter for 3 years in a row now. 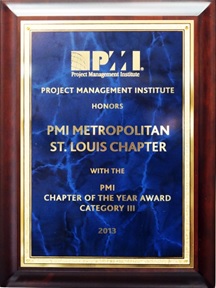 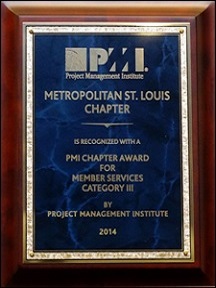 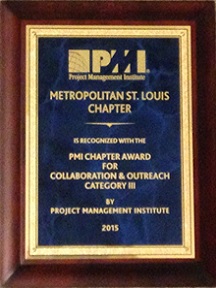 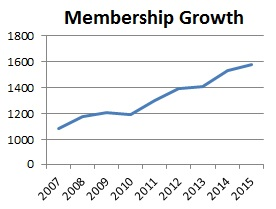 Now exceeding 1,800 members, it's hard to believe that membership in the original Metropolitan St. Louis PMI Chapter totaled only 25 when the organization formed in 1994. Miles Barnett, PMP and Past President, is fascinated by the prodigious growth. At the conclusion of his presidency, which ran through 1999, the Chapter had grown to about 350 members. Barnett said, "Someone told me early on, if you can get your chapter up to 300, it will be self-sustaining. There are enough people interested, you can have a decent meeting, and have enough people for the officer positions. That's when we stopped having to brow-beat people to participate."

In order to form a chapter, 25 individuals must be willing to join and be interested enough to pay dues. A small group of the original 25 Metropolitan St. Louis PMI Chapter charter members prepared a charter document, got it approved, and the chapter was formed. The effort was spearheaded and led by Dottie Burton, who never held a chapter office, but without her drive we probably never would have gotten organized.  Miles Barnett was one of the charter members, and the organization's second president. He is currently retired.

The Metropolitan St. Louis PMI Chapter initially held meetings in conjunction with a Cost-Estimating organization in the historic Engineers Club building at 4359 Lindell Boulevard in St. Louis. According to Barnett, "They had a nice facility, and they had a regular program set up, meeting quarterly, and we partnered with them as both organizations benefited from both the cost savings and the sharing of ideas that came from having more people attend these events."

The format has always been a dinner meeting with some kind of program or presentation. The meetings have typically been held once a month, September through June. "I'm mildly surprised that there continues to be as much interest in project management from the local community. This has been over ten years. I shouldn't be surprised, nevertheless, it is interesting."

The Chapter eventually expanded into its own meeting space, meeting at the old Joe Hannon's Restaurant at I-270 and Dorsett Rd., and eventually settling into the Sheraton Plaza at Westport. The Chapter has been meeting at the current meeting location in at the Clayton Plaza Hotel in Clayton (7750 Carondelet Avenue, Clayton, MO 63105) for the past seven years.

While Jim Schafers served as a chapter leader over the four years as president-elect, president and past president from 2006-2009 the chapter grew dramatically. When he began serving in the four year cycle we had around 600 members. During the four years membership doubled to over 1,200 members. We moved our monthly meetings to the Clayton area (Crowne Plaza) in order to be more centrally located for our membership. We "survived" the Highway 40/64 shutdown and saw attendance grow at the meetings.

We built upon the idea of having multiple venues for the meetings and first began meetings in St. Charles county and metro east. We introduced additional breakfast meetings and lunch meetings to add flexibility to the new venue sites.  In addition, we added an After-hours networking events, Young Professional Group meeting, Toastmaster’s club, and a mentoring program.

We added some new technology to the chapter by launching the chapter's first SharePoint site which could be used for document storage and collaboration by Board members and their committees. This system replaced the Simon project tracking system that was used for several years. We launched in new chapter website that gave us expanded capability for communications with our members. In addition, we replaced our event management system and moved to the StarChapter chapter event management system.  Lastly, we incorporated the VRMS system to support our volunteer opportunities which are so important for our chapter success.

We have conducted a number of professional seminars for our membership over the years which included nationally known speakers such as Rita Mulcahy, Neal Whitten, Scott Carbonara, and many more.